What are the different types of Japanese knives?

For some years now, we have been seeing more and more Japanese knives invading the kitchen shelves of supermarkets or specialist shops, when they do not fail to arouse real interest… Faced with these new products, many people are wondering. But what is so special about them? And how to choose a good and genuine Japanese knife? One of the specificities of the traditional Japanese knife is that it is entirely forged by hand, by a qualified blacksmith as in the days of the samurai. This results in a blade that is much more resistant than a traditional knife. Indeed, the hand-forged steel is much denser and therefore a more powerful knife overall (see also article on Damascus blades)

There are many shapes, styles and brands of Japanese knives, each with its own particularities and its own use in the kitchen, the bevel of the blade being generally on one side only. Here are the most common shapes of Japanese knives you can find on the market:

The term Santoku literally means “three good things”, which could be translated as slicing, chopping or mincing. The Santoku knife is an all-purpose Japanese knife, with a slightly curved blade that gives a very pleasant rocking effect. It will allow you to chop your herbs with precision and to mince your fruits and vegetables into small cubes. Indispensable and indispensable in your kitchen, whether you are a professional or an amateur, it will accompany you in the preparation of all your recipes. 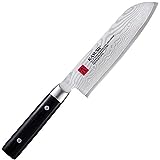 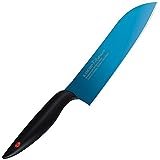 It is in Sakai that the Debahocho would have been invented around 1700. This region is rich in fish and in particular in pink sea bream, a flat fish with a large number of bones which required a wide, short and solid knife. Little known in France, it deserves more attention from fishmongers. 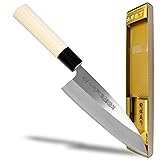 The sushi knife, known in our country as the “sashimi knife”, is a long knife with a single-sided sharpening, it is also characterised by a rigid and non-flexible blade, which allows it to remove the skin of the fish with ease without wasting raw material. The rigidity of the blade also allows it to cut sushi with such precision that each bite is identical to the next.

The most popular sashimi knives: 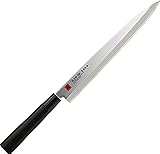 The Gyuto knife, literally “beef knife”, is the Japanese chef’s knife par excellence. Its blade is flatter than a Western chef’s knife and is known for its precision due to the geometric angle of its blade. A Western knife generally has an edge angle of around 20-22°, while a Gyuto knife blade has a sharper edge angle of around 15-18°. These Japanese knives are mainly used for cutting meat, especially for slicing large pieces of meat.

The most popular Gyuto knives: 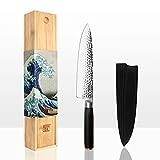 Nakiri bocho (knife for cutting greens) and Usuba bocho (thin-bladed knife) are knives used only for the preparation of vegetables. Often confused with its big brother, the Usuba is very popular with Japanese chefs. Suitable for cutting on a chopping board, these knives are much thinner than the Deba which has a heavier blade. It has a rectangular shape with a high, wide blade, which makes it perfect for cutting vegetables or herbs. In addition, because of its flat shape, you can also use it to move the cut food into another container like a shovel. Its length is between 14 and 18cm. 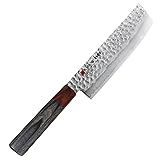 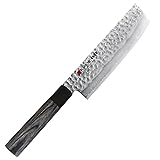 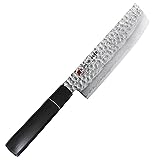 The Honesuki knife or boning knife differs from the western boning knife in its triangular shape and rigidity. Perfect for boning poultry thanks to its asymmetrical edge, it is however possible to find it with two sharpened edges. Rarer, but just as effective, is the Garasuki knife, also a specialist in boning, with the difference that it combines boning and carving knives thanks to a sharper angle. 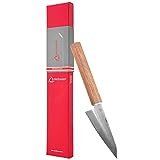 This is the Japanese carving knife, also known as a slicing knife. They are used for cutting large pieces of meat, such as roasts, but their use is not limited to that. Its long, smooth blade allows it to slice any meat or fish in a single pass with great ease of use.

The most popular Sujihiki knives: 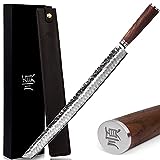 There are a large number of Japanese knives, some of which are used for a single specific task. Among the wide choice available, we can mention the Ajikiri knife, a small knife dedicated to cutting small fish. Or the Fugu hiki, as its name suggests, this Japanese knife is used for lifting and cutting Fugu fillets, a very popular fish in Japan, which can be toxic for humans if not prepared properly. The Unagi saki bocho is mainly used for lifting eel fillets, and its very precise tip allows you to open an eel along its entire length without any problem. Finally, we will finish with the Pan kiri bocho, which is simply a bread knife, renowned worldwide for its sharpness. Whatever type of knife you choose, here is an article to help you know what budget to choose for your Japanese knife. What if I’m left-handed?

Example of an eel knife (Unagi):

This is the end of this presentation of the different Japanese knives, even if the list is not exhaustive. I will add other models as we go along. If you liked this article, don’t hesitate to share it ! Thank you for sharing!