Which Japanese knife should I choose according to the dish I am making?

In Japan, the art of cutting is very often linked to particular dishes. For example, some knives are dedicated to a specific use or to a particular product. There are blades for large cuts of fish, others for special fish, and others for different products:

There are others, but that’s not the subject today.

I will tell you today, which knife(s) to use depending on the Japanese dish (or not) you want to make. In short, how to make the right choice!

Which Japanese knife to use to make sushi?

A sushi is composed of 2 parts: the rice and a slice of fish (but it can also be a lot of foods: omelette, squid, shrimps, tofu, etc.).

For the first part, no knife is needed. For the second part, however, you will need to adapt your blade to what you want to cut.

For fish, choose a bevelled blade so that you can make thin slices without tearing or damaging the flesh. The Sashimi knife is the most suitable.

If you don’t have one of these knives, you can use a complete knife like the Santoku or the Gyutoeven if this is not their primary use. Be careful, these types of blades have two cutting edges, you risk damaging the product and its taste.

Alternatively, it is also possible to use another bevelled knife such as the Usuba, which was originally designed for cutting vegetables.

Example of a sushi knife:

Which knife should I use to cut maki?

The maki consists of 3 parts:

You will therefore need a knife to cut the food, which you should choose according to the food. And a Yanagiba (also called Sashimi) to cut the maki rolls.

The Yanagiba is a bevelled blade, it is perfect for making thin slices of fish or seafood. It will also allow you to cut the rolls cleanly and neatly.

Once you have made the maki rolls, take them in pairs and make 3 cuts: one halfway through the rolls, then two in each half (see video below).

Which knife should I use to cut my california rolls?

California rolls are reverse maki. The knife to use will therefore be the same: Yanagiba or Sashimi. Always remember to wet your blade well between each cut so that the rice does not stick to your blade.

An additional ingredient is often added: sesame seeds. They are put on top of the rice to give a little colour and crispness.

On some Californians you can find fried onions, which is also very good!

Which Japanese knife to use for slicing sashimi?

Sashimi are usually thin slices of raw fish. But you can also find shrimp, scallop or avocado sashimi. A variant of this dish is chirachi. It is served in a bowl containing :

The knife used to make these very thin slices is the Sashimi, also called Yanagiba. You are starting to know it!

It is a bevelled knife that allows you to make a very precise cut, without tearing the flesh. In the Japanese tradition, this function is very important because it allows to preserve the taste of food. Another interesting fact is that in Japan, when you are cooking for someone or for guests, the precision of the cuts must be equal to the respect you have for them.

An Exemple of a Sashimi knife:

Which knife should I use for my nabe?

Nabe is a type of dish cooked in a pot. There are 2 types:

the pot-au-feu style nabe, where all the ingredients are cooked at the same time in a large pot

For these two types of dish, the ingredients can be very varied. Thin slices of beef, various fish and seafood, vegetables of all kinds.

The fondue version of nabe is also called “Shabu Shabu” because of a Japanese onomatopoeia that imitates the sound of the slices of meat when they enter the broth. Yum!

The knife to use for this dish will depend on the food. If you are using vegetables, choose a Usuba or a Nakiri.

For meat you can use a Honesuki to separate the meat from the bones, a Gyuto or a Santoku. The last two being complete and versatile knives, they will be suitable for many cuts.

Yakitori or Japanese skewers, which knife to choose?

I’m sure you love these little skewers! Originally, it means “grilled bird”, so they are often poultry skewers. Nowadays, there are many different kinds: chicken, beef with cheese, shrimp or scallops.

They are cooked on the grill, simply with salt or with a thick sauce added at the end of cooking.

The knife to choose for yakitoris will therefore most often be a chicken or meat knife. In this case, use a Gyuto or a Santoku to make the bites and a Honezuki to bone the poultry.

If you make scallops, put them whole or cut them in half if they are too big to fit on the skewers.

For the beef/cheese yakitoris, you will need to make a thin slice of meat that will cover the cheese. In this case the Sujihiki is the ideal knife! Also known as a “bacon slicer” it is perfect for thin cuts of meat. Otherwise, use a Yanagiba or Sashimi knife (even though it is basically a fish knife).

Yakisoba or Japanese fried noodles, which blade should I use?

Yakisoba (literally “fried noodles”) are noodles made from wheat flour. Be careful not to put soba (Japanese buckwheat noodles) in your Yakisoba. The basic recipe is simple. All you have to do is fry strips of meat in a pan. To which you add vegetables such as cabbage, carrots or leeks. Then fry the noodles, adding a little water with the other foods until the water evaporates.

For this dish, I recommend a complete knife, such as a Gyuto or Santoku. It will allow you to cut both vegetables and meat. For purists, use a Nakiri or Usuba for vegetables and a Sujihiki for meat. Possibly a Honezuki if you need to debone.

If you also make pasta and want to cut it like a master, use a Menkiri. This rectangular blade is made for cutting noodles.

An example of Nakiri:

Which knife for my ramen?

Ramen, like Yakisoba, is a Chinese recipe with a Japanese twist. There are many borrowings or mixtures of cuisines from other cultures in Japanese “gastronomy”.

Ramen is a kind of hearty pasta soup. It started out as a Chinese immigrant dish, then was given a Japanese twist and was quickly adopted by all social classes. Ramen is a wheat noodle served in a pork broth with small pieces of vegetables and meat.

To make this dish you will need to equip yourself accordingly! A santoku knife or a Gyuto (also called a chef’s knife) to do everything with a single knife. Or for professionals, knives adapted to the product and the type of cutting. There is a special knife for cutting pasta: the Menkiri.

Which knife to use to make udon noodles?

Udon is a traditional Japanese noodle dish. They are thick, soft noodles (2 to 4 mm) made from wheat. White and shiny, they are very popular hot or cold.

There is a specific knife for cutting Udon: Udon Kiri. This wide blade looks like a chopper, but has a return under the handle. Its bevelled blade prevents the dough from sticking when cutting.

This knife also exists for soba, the Soba Kiri, which is very similar to the Udon Kiri. This atypical blade is sometimes seen in manga, when a cook leaves his kitchen to fight.

Here is an example of this knife, quite rare in the West: 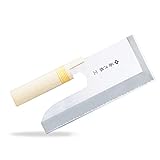 That’s it for today, I hope this article helps you in your choices. This list is far from being exhaustive, but it presents the main models of Japanese knives. If you want some help to know what price to put in your knife, follow our article. I have also written a presentation of 10 excellent brands of Japanese knives.